Choose your career
Home LATEST NEWS Today’s Focus on The Hindu| Bull and gore: On jallikattu 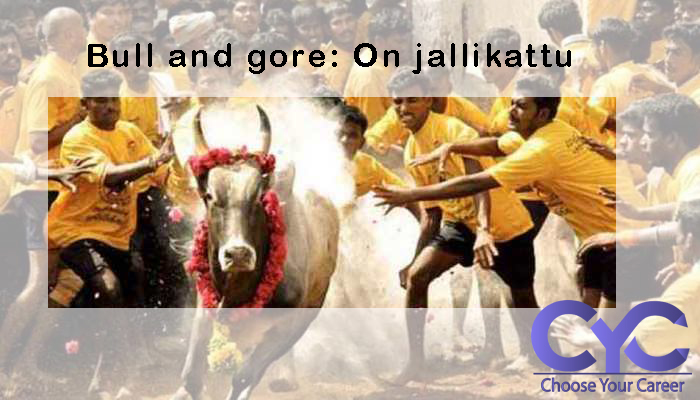 As a danger to life and limb persists, it is time to introduce protective gear for jallikattu
Seen by the courts as cruelty on bulls, but celebrated in Tamil Nadu as a display of valour, the rural sport of jallikattu is an inevitable part of the Pongal season in the State. It is promoted as a tourist attraction by the government and its appeal as a symbol of Tamil culture remains the same year after year. It is only the odd voice that sees it as a relic of a feudal past. However, one aspect that remains unchanged — through the years in which the legality of the bull-taming sport was questioned, the event itself banned, and then restored by law — is that every season, it leaves a few dead and scores wounded.

Often, these wounds are a trauma doctor’s nightmare, given the grievous nature of the bull gore injuries. It is an event that cries for maximum regulation. The regulations have been tightened from time to time, and no event takes place without official permission or medical supervision. The playing arena is protected by double barricades, the entry point and ‘collection point’, where the bulls are to be taken back by the owners after they leave the arena, are supposed to have sufficient protective features to minimize incidents that lead to injuries and fatalities.

Yet, some have died in the main events that took place in the last few days; they include bull owners, spectators and an organizer. The victims were mostly gored or stomped upon. Over a hundred are being treated for injuries, some of which are quite serious, marked by internal ruptures that may have a lasting effect on the victims.

The truth about jallikattu is that it is well nigh impossible to hold an incident-free event. Even conceding that every sport has an element of the danger of injury, especially contact sports, the distinguishing feature of events involving animals is that they are driven by the instinct of self-preservation and anxiety, and are not bound by rules and reason the way human participants are. Inevitably, the human casualty list is higher, even though it has been long argued, and even judicially determined that jallikattu constitutes a grave violation of animal rights and a perpetration of cruelty on them. Popular sentiment, political patronage and the cultural instinct to preserve practices that hark back to a hoary past contribute collectively to the continuance of the sport.

Other virtues attributed to it include giving native breeds a good shot at survival and an opportunity to youth to develop a robust outlook even while earning rewards. What should ultimately matter, above all, is that any activity that endangers participant and onlooker alike should be held under rigorously monitored regulations and restrictions. It is also time that appropriate protective gear is devised and made mandatory for participants.